BANK OF AMERICA: Buy these 4 stocks that could benefit from the mass adoption of digital assets driven by the regulation of the $141 billion stablecoin industry 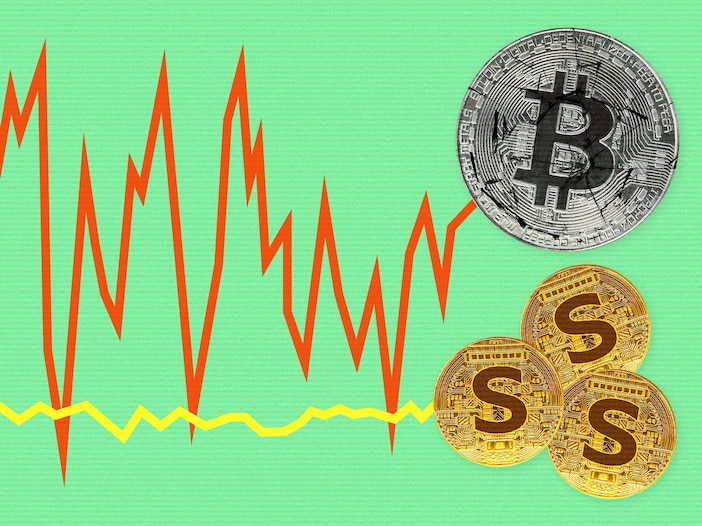 With a market value of about $141 billion, stablecoins have become "too large to ignore," BofA says. The bank views regulation as the catalyst for the mass adoption of stablecoins and digital assets. It shares 4 stocks that could benefit as regulation leads more players to the stablecoin industry.

In October, Bank of America's digital asset strategists launched the firm's crypto research with a report calling the $2.5 trillion industry "too large to ignore." Now, the same words are being used for the $141 billion stablecoin market.

Stablecoins, which peg their prices to fiat currencies, commodities, or other cryptocurrencies, have become a systemically important asset, but they remain the "wild west," analysts led by Alkesh Shah and Andrew Moss wrote in a November 23 research note.

With quarterly transaction volumes reaching more than $1 trillion this year, stablecoins are widely used by traders and investors to transfer money between exchanges, move money between exchanges and wallets, lock in trading profits, or "rotate into cash" during periods of volatility spikes. They are frequently used as collateral for leveraged digital asset products, the analysts have observed.

The largest stablecoins are pegged to the US dollar. For example, there are more than 72 billion tether coins (USDT) in circulation, which means over $72 billion is supposed to be held in reserve to ensure that the coins are fully backed and liquid. The same goes for USDC coins (USDC), which have over 37 billion in circulation.

The implication is clear: "digital assets and traditional financial markets are more connected than many realize," the note said.

Shah and Moss explained that if bitcoin were to fall to zero, the impact on traditional financial markets would be limited. However, if a top stablecoin were to become unpegged, the liquidity of stablecoins, many of which are backed by securities such as commercial paper instead of FDIC-insured bank deposits, would become severely strained as investors dash for fiat currencies.

The analysts are particularly concerned about the run risks of tether given its size, asset quality, and likely liquidity. They also question tether's commercial paper holdings, which are "not transparent."

"If Tether were to have insufficient liquidity, it is possible that they would deliver unknown securities in-kind or gate redemptions. Either action is likely to accelerate investor redemptions and could spill over into other stablecoins," they wrote.

In the case of a stablecoin run, the central bank is unlikely to come to the rescue as it would do in traditional financial markets due to the unclear regulatory jurisdiction and the Fed's limited ability to transact in digital assets.

"The Fed could set up emergency facilities to limit a stablecoin fallout in the fiat world, but would be unlikely to help in the digital asset world," Shah and Moss wrote. "To continue the Wild West analogy, if there is a stablecoin shootout, the sheriff will not be coming."

'Regulation as a catalyst to mass adoption'

Given its rapid growth and significant role in the crypto market, stablecoins could vastly benefit from a comprehensive regulatory framework. In their view, appropriate regulation could also catalyze the greater adoption of digital assets by institutions, retail investors, and banks.

The analysts believe that the Treasury's "Report on Stablecoin" on November 1 is a sign of the urgent need to regulate stablecoins, which could then become a viable means of payment. Their research reveals that many institutions are waiting for regulatory clarity before adding exposure to digital assets.

"Stablecoin regulation is a significant first step toward a comprehensive regulatory framework that encompasses the digital asset ecosystem," they wrote.

Regulation could also allow payments companies and banks to enter the digital asset industry, according to Shah and Moss. Companies such as Western Union (WU), which focuses on cross-border payments and international remittances, could integrate blockchain technology and stablecoin payments into their platforms. Meanwhile, firms including Mastercard (MA) and Visa (V) have already partnered with digital-asset companies and could further expand their offerings under a clear regulatory framework.

The analysts also expect banks to benefit from stablecoin regulation. Specifically, digital-asset-focused banks such as Signature Bank (SBNY), which have already entered the market, could further differentiate themselves. The Treasury's report, which recommends that "stablecoin issuers be insured depository institutions," could also position banks as the "natural partners" in the stablecoin space, they added.

The aforementioned US-listed buy-rated names could see market value expansion as a result of comprehensive stablecoin regulation, according to the note. Further risk and reward analyses of the stocks are listed below. 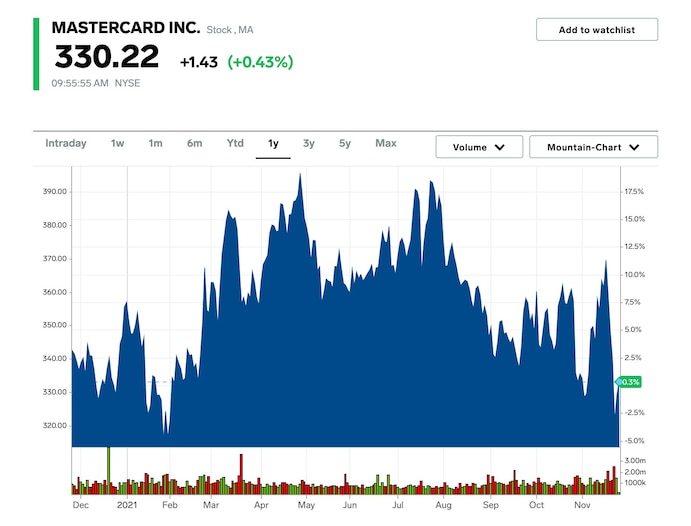 Commentary: "We utilize a blend of 34x '23E GAAP EPS and our DCF model to calculate our 12-month price objective of $416. We view the multiple as justified, given MA's above average earnings growth in a normalized environment, which we attribute to the quality of its business model and competitive position, as well as a flexible cost structure. Our discounted cash flow (DCF) analysis assumes a weighted average cost of capital of 8.7% and a terminal growth rate of 4%.

Downside risks to our price objective are: 1) weak consumer spending in the event of a macroeconomic downturn, 2) increased customer concentration and consolidation, 3) legislative and regulatory changes, 4) potential litigation settlements, which could include monetary damages, and/or result in changes in business practices, 5) loss of customer contracts due to increased competition or new entrants, including local/global payment networks, new start-ups and existing large and small technology companies, and 6) large fluctuations in the value of currencies/foreign exchange rates." 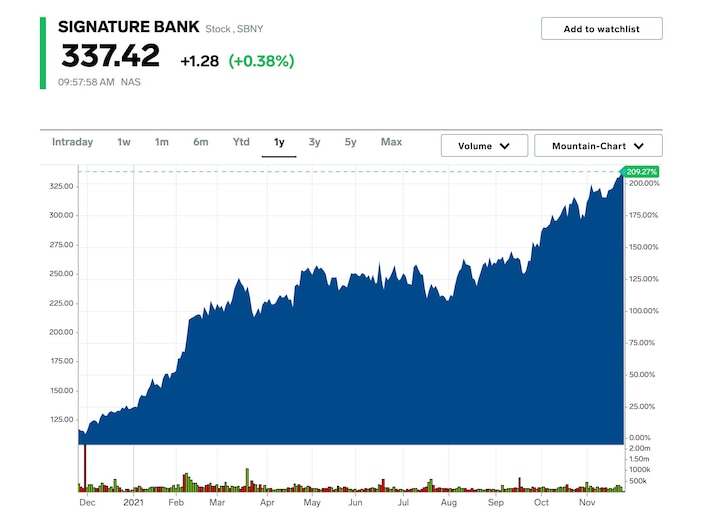 Commentary: "Our PO of $405 is based on a 75% weighting to 2023 P/E and 25% to P/YE22e TBV per share. The higher P/E weighting is justified in early stages of an economic cycle given investor focus on growth and EPS upside from higher rates. We assigned 20.0x our 22E/2.3x our 2023E multiples, respectively, above peers due to stronger balance sheet growth and a healthy credit profile. The above peers multiples are driven by our expectations for SBNY to deliver above average growth given significant EPS sensitivity to higher rates. 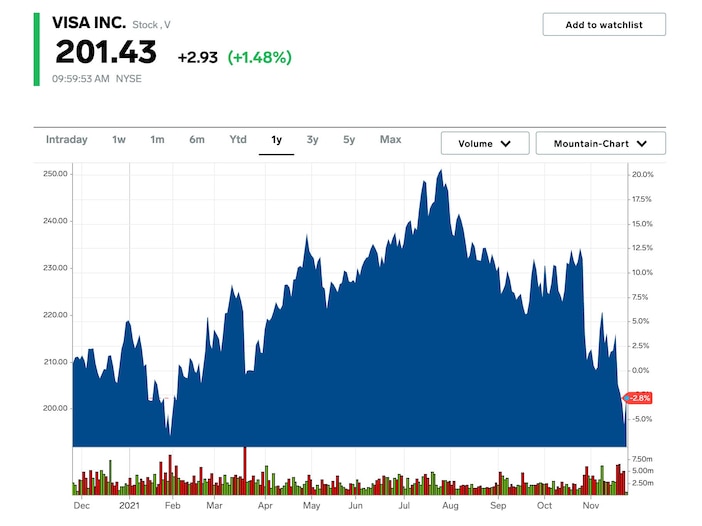 Commentary: "We use a blend of 32x C'23E EPS (GAAP) and our discounted cash flow (DCF) model to calculate our 12-month price objective of $279. We view the multiple as justified given Visa's growth profile, execution track record, and large addressable market opportunity. The key assumptions in our DCF model include a terminal growth rate of 3.5% and a weighted average cost of capital (WACC) of 8.5%.

Downside risks to our price objective are: 1) weak consumer spending in the event of a macroeconomic downturn, 2) increased customer concentration and consolidation, 3) legislative and regulatory changes, 4) potential litigation settlements, which could include monetary damages, and/or result in changes in business practices, 5) loss of customer contracts due to increased competition or new entrants, including local/global payment networks, new start-ups and existing large and small technology companies, and 6) large fluctuations in the value of currencies/foreign exchange rates." 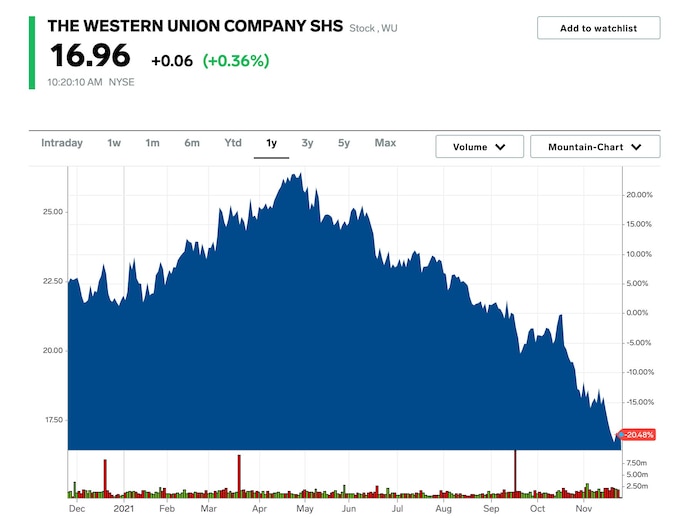 Commentary: "We use 11x our '22E adjusted EPS to calculate our 12-month price objective of $25. This multiple is a 45% discount to the S&P 500, due to WU's lower growth and earnings quality, as well as competitive threats.

Downside risks to our price objective are: 1) C2C pricing pressure intensifies, as the competitive environment thickens, 2) new regulatory events cause financial/operational harm, 3) cash flows become impaired and cause WU to decrease its share buyback and/or dividend."